We arrived at the Moreland home around 6:00pm on Friday - we went to dinner at the Olive Garden and then I went to bed, completely exhausted. But Ryan and Billy stayed up going over the plan for Saturday: their presentation and power point.
We left Hayden at 8am on Saturday March 7. We drove to the Holiday Inn in Spokane, WA to the IDA Leadership and training Conference. 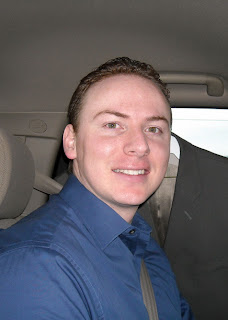 It's always so fun to go to those. I feel like I'm married to rock star or something as everyone scrambles to introduce themselves - "You're Ryan Green's wife!? I'm..." or "It's so nice to see you Care-Anna" (I can tell they've been practicing my name ;)

Ryan in the car on the way to Spokane

The heads of the company are so close! At first I wasn't sure what I thought about being part of such a huggy group, but have now decided that I don't mind. I was being hugged by CEOs, Presidents, Vice Presidents, Financial and Web advisers and of course their wives. 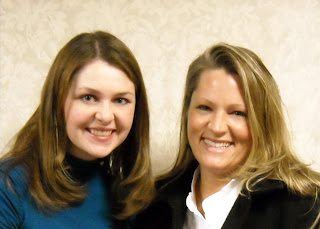 I hadn't seen
most of these people since the event in October, but was excitedly welcomed with open arms.


Caranna Green and Heidi Moreland
Juliet took this picture saying,
"Let's get a picture of the wives
of the two super stars of the company."

They structured the conference differently this time - instead of two 3 hour blocks of lecturing - there were different break out sessions. We were each given a schedule and everyone got to decide which sessions and in which orders they would attend them.
So the groups were smaller and each session was only about 45 minutes. I thought it was a good format and went very well.
Billy and Ryan shared a session - they worked together, talked about different aspects of their assigned topic and played off of each other. I was proud. 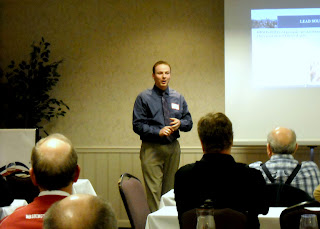 Ryan talking to all the people
The only down side of the day was that while we were in Spokane I had left my neck brace in Hayden along with the muscle relaxants I was supposed to take 3 times a day. By the time we got back to Hayden that evening I was hurting a lot - and regretting choices I'd made for vanity's sake. 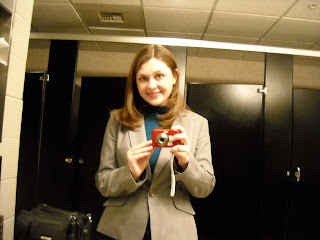 I'm kind of a nerd, I know. I took this in the bathroom as proof that I was there and kind of cute that day. ;)
I'll be posting more picture from the event on my other blog - when I get around to it.
Posted by Caranna at 11:49 AM

Okay, I am pretty sure that I've missed what exactly Ryan does for work, but I am absolutely LOVING the fact that you two are business celebs - plus, you're totally adorable and quite frankly, I think you deserve it. You look great!

You look great. I love the jacket! I remember one time going to your place and you had some music on that I used to listen to when I was I kid. "See me run running around in circles running and running running around the room"... Do you know what I am talking about? I wonder if you know where i can get it?