Our trip, Day One:

We took a trip to Spokane, WA last weekend. We ended up driving for more than 10 hours to get there (because we thought we knew where we were going, but didn't really) We got off I-15 at Idaho Falls when we should have stayed on it until we reached Butte, MT.
So we went through Rexburg, Island Park, and West Yellowstone. I didn't even realize anything was amiss until Ryan announced "We're just coming into Bozeman."
"BOZEMAN!!!? What are we doing in Bozeman? We're supposed to be in Butte!" Was my response. I guess that's what you get for not paying attention. We would have been doing really well if we'd wanted to see Ryan's parents in Powell or my Family in Lovell, but we were trying to get to Coeur d'alene!
We bought a map and eventually found our way to I-15 but it ended up costing us 2 1/2 hours! Silly, Silly.

I wore my neck brace the whole trip - trying to minimize trauma during the long car drive (aren't kids fun?) 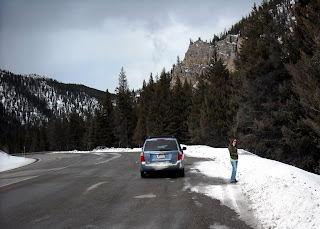 I made a snow ball! In March - without any gloves! 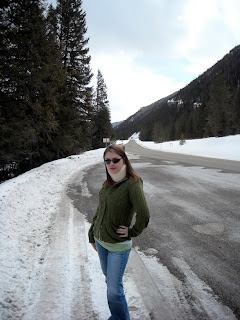 I'm workin' the neck brace! It's uncommon BECAUSE it's high fashion (didn't you know!?) Like all that stuff you see on the runway - it's not ugly, it's fashion! :P 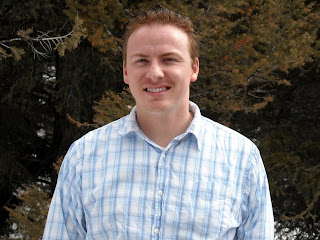 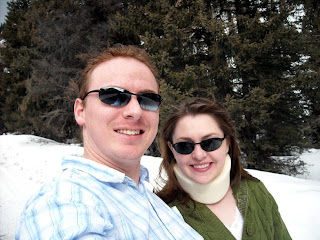 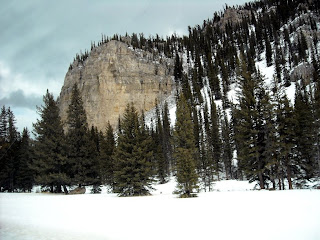 We stopped in a pull off somewhere between Island Park and West Yellowstone. We wanted to stretch our legs a bit and take a few pictures (the snow really was very pretty)

And that was day one of our trip - Friday March 6, a week ago today.
Posted by Caranna at 1:39 PM

That snow looks amazing! I was reading your post going - no way! I have family in Lovell AND Powell, too. What a coincidence!

I have to chuckle. Bozeman is an oopsie. Especially because if you had just stayed on I-15 you would have gone straight to Butte. Oh well, as we say around here, "Ya live an' loin." I also think it is an amazingly small world because Callie's best friend's parents now live in Lovell, she used to live in Powell, Sheridan, and some place called Tongue River, and I guess Lovell too since they were living there when she was born. I think that was a horrific run-on, but I will not fix it because I am too tired.

You were in Bozeman? You almost made it to me! :) You should have just gone two more hours out of your way and stopped to say hello. LOL!