Thursday was Canton's 3rd birthday! Ryan got off work at 4:00 so we had plans to watch a movie at the Reel Theatre, and then have a special birthday dinner at Winger's. At 5:00, as we were heading out the door we got a phone call.
My little nephew was in the emergency room. He had awoken his parents early that morning. He was in their bed and had a seizure! His seizures continued through out the day about every 20 minutes. It was a very scary time for their family. Ryan was able to go to the hospital and help give the baby and my sister-in-law blessings. While Ry was in the hospital for nearly 2 hours the boys and I walked around the campus and ended up at the park. That's where we were when Ryan called us and told us to come back.
They got the seizures stopped, but the next 4 days were pretty rough ones for the little guy. Baby Arvil is only 5 months old and had to undergo MRIs, EEGs, Spinal taps, and blood tests. The doctors were able to rule out several things, but have yet to discover the cause of his seizures. He was discharged from the hospital this afternoon, with some anti-seizure medication in hand. So I guess now we just wait and see.
SO, Canton's birthday celebration was put off because of those family troubles. BUT we were able to have a party on Saturday.
Grandma and Grandpa White came with the rest of Gavin and Callie's kids (they were watching them so Gavin and Callie could focus all their attention on getting Arvil well.) My Aunt Bonnie and Uncle Tom came with their two youngest, Matt and Amy, and Grandma Green surprised us all by showing up on her way to Powell. She was in the process of moving this weekend, and stopped on her way through to attend our little party. We were so surprised and pleased!
After our party we all took naps, even Ryan and I, then we went to a movie. We saw "The Kung-Fu Panda" at the Carmike 7. It was not so very fun, our kids wouldn't sit still, they were extra wiggly, wanted to talk, and were more interested in the projector booth and lighted Exit signs than the movie. But we tried. Maybe we'll wait until they're a bit older before trying that again.
Our next stop was far more successful. We went to see the new McDonald's. I had never been in there and neither had our kids. It was great fun. Canton was so excited!! He was singing a "McDonald's song" that was pretty cute. He told the lady behind the counter that it was his birthday and she treated him all special. Tate and Canton each ordered their own food and felt so big and grown up. They got Star Wars toys in their Happy Meals that they were way excited about, and then they got to play on the great big, awesome play equipment. There was even a special area just for babies! We had lots of fun!
It was a very good day. Good to see family, and celebrate our special little 3 year old. He's such a funny kid! 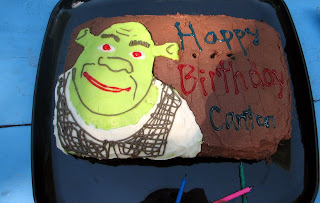 I made a "Shrek Cake" just like he asked for. 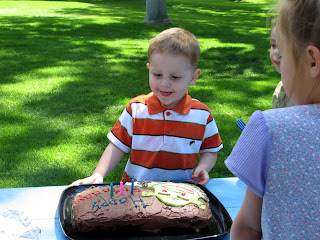 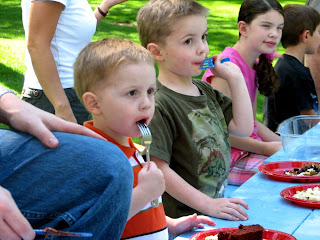 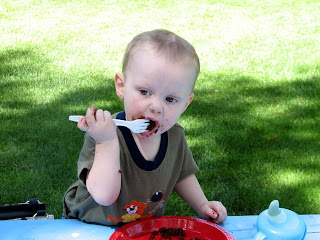 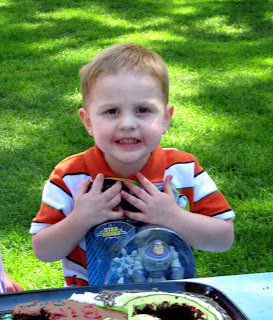 Buzz Lightyear, to the Rescue! Thanks Bakes'! 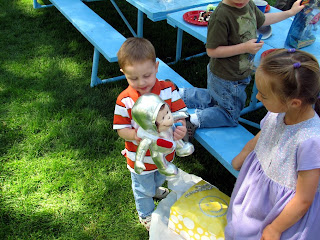 Looks like the party was a success! How is your Aunt Bonnie ANd uncle Tom? Since my Parents dont live there anymore I never know how people are!

They are doing good! I can't believe that Wes is turning 16 this year!! He's on the football team at Century and has quite the fan club I hear. (But he's far to humble to admit that)Bonnie went back to school this semester. I guess she decided she could finish and get her degree now that all her kids are going to school all day.