In the World of the Whites

For those of you who don't know - I was a White before I turned Green. My family has been going through a lot this past week!

I had planned to go to Preston to spend some time with my parents while Ryan was away on his business trip, but my parents, unexpectedly, ended up taking care of my brother Gavin's four older children.
Sad News
Gavin and Callie have a home in Preston not far from my parents. Their 10 month old Baby, Arvil, has been having a lot of health problems. He had been having lots of seizures. His first experience with seizures was in August, they thought they had the problem under control, but he has had a cold, and every time he would start coughing he would have more seizures. Gavin and Callie took him to the emergency room in Preston. There they made arrangements with Primary Children's Hospital in Salt Lake City, UT and sent them there.
The doctors told them that children his age who have seizures typically have seizures that last 2 - 4 minutes. But Arvil's average seizure lasted about 20 minutes and he had several that lasted a full half hour. It's pretty scary.
He hasn't been able to move his right arm since they went in, but they've been having a therapist work with him. The MRI showed a lot of damage to the left side of the brain, primarily in the cortex. Which would explain the lack of motor skills on the right side of his body.
They have blood specialists, geneticists, gastroenteritis, neurologists, etc. working on his case. The radiologist said that there were indications that he had had strokes and that his blood vessels are too small and disorganized.
They now believe that the seizures are occurring because of the brain damage, that is consistent with a series of strokes. Arvil's seizures and strokes seem to be caused by abnormally narrow blood vessels in the brain which can not always keep up with demand for oxygen by the brain tissue. Illness and stress seem to worsen this and act as triggers for increased seizures. This is something that none of the doctors have seen before. They are contacting some internationally reknowned vascular specialist today and then later they will have a big sit-down with about a dozen doctors and discuss options.
Arvil has a combination of RSV, Rotavirus, and C-dipth (a bacterial infection). All of those things seem to be aggravating his condition and causing more seizures. But Arvil is a fighter. We've all been praying for them and hope that he comes out of this all right.
They have been at PCMC since last Thursday, a week ago yesterday. The other kids are still with my parents. My Mom said she's not getting much else done, but that's alright! Taking care of grand kids is important too! I'm glad that she's able to help them out. 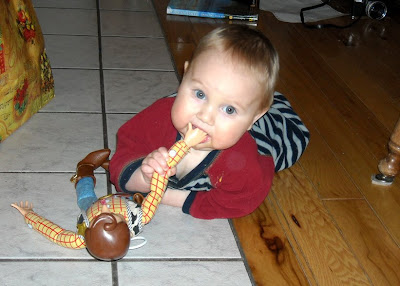 Gavin and Callie's cousin Clancy have started a blog for Arvil to keep us all updated and in the loop. 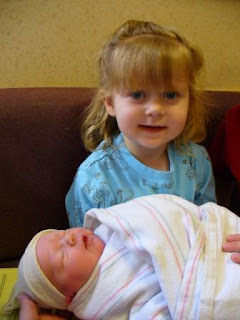 AND some happier news! My Sister, Alayna, had a baby yesterday!
Ainzlee May Slinker joined our family at 7:58am January 15, 2009. She was 6 lbs. 11 oz. and 19 inches long.
Both Mom and Baby are doing great and plan to be back home on Sunday.
Brandon and Alayna have a 4 year old little boy, a 2 year old little girl, and a brand new girl to add to their collection!
To read more about the Slinker family adventures see their blog. 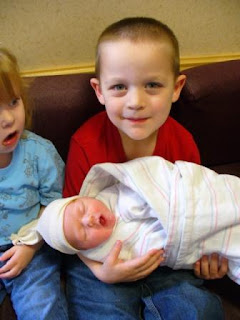 I'm sorry to hear about your nephew. That is so sad. We'll keep him and your family in our prayers. It seems like there is a lot of medical things going on now a days. Definitely the second coming. Congrats on the niece though. It's always good to have good news with the bad. Good luck.

Oh, how very scary! What a terrible thing to happen to such a cute little guy. On the up side, that new baby is adorable- and I love her name!

Oh how scary and stressful. You and your family are in our thoughts and prayers.