It's a VERY Special Day! 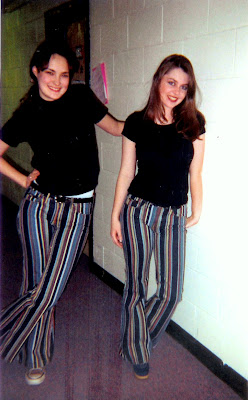 This was me taken 6 years ago today. My awesome roommate Meikjn and I bought these pants at TJ Maxx for 3.99 And decided we were super cool - we matched and everything!
We went to a dance and were the life of the party :)
That was the night I met Ryan -

This dance was a "Feed the 5,000" dance. We had to take a can of food to get it. The dance was not well publicized. I vaguely remembered hearing about it in the announcements at church. So we got dressed up, took our chances and headed up to the stake center on the hill.
There were only a hand full of people at the dance. It appeared that people would show up, poke their heads in, think "this is lame" and leave. But that all changed once Meikjn and I showed up in our magic pants!
My buddy Tarron was D.J.ing that night - I had him put on some good salsa music, dragged him away from his D.J. spot and we tore up the dance floor (I used to be so cool!!) That seemed to do the trick, people started dancing and everyone who showed up from that point on stayed!
There were probably about 15 people there total. But we had a blast!! Meikjn and I got the majority of the male attention - because we're so cool!
Once the clock struck 12:00 we all had to leave the church, but we were having so much fun that we weren't ready to go home.
We all decided to watch a movie at Jamie's house, but no one knew where Jamie's house was so we met at Wal*Mart. I took the free way, everyone else came down Yellowstone and we: Meikjn, Dave and I beat them by a good 5 minutes!
We went in to buy ice cream Ryan gave me a piggy back ride through the store - and then we went to Jamie's house ate the ice cream and watched "Monster's Inc." Through the whole movie Ryan was pretty cuddly with my roommate.
When we finally headed home, around 4am, Ryan ran out to my car and asked Meikjn for our phone number. She couldn't remember it so she looked at me and I mumbled the number. I was very tired, I said it fast and slurred it together. Neither of us thought he'd remember it in a million years! He didn't even write it down!
He later told me that he said it over and over to himself all the way home and wrote it down as soon as he got inside.
Meikjn got most of his attention that night, then he took both of us out a few times (the whole three some thing was kind of weird) but before long he focused all his attentions on me.

Some silly pictures taken in the dorms.

I can't believe it's been SIX years! It's the day it all started! The day that led up to our engagement, wedding, anniversaries, and children. I can't believe how much has happened since then. I love my husband more and more every day. I knew he was the one not too long after we started dating, and the longer I'm with him the more I learn about him and the more I fall in love with him all over again! 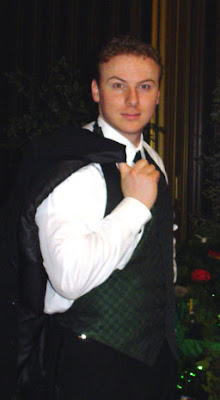 Those pants are just WILD! Fun story . . . come to think of it, I'd never really heard it - at least with all that detail. Way fun. Being married to your favorite person beats being single all to heck! haha

That's so fun.I love hearing how people met... Where's meikjn from. That names sounds so familiar and she looks kind of familiar too? SHe wouldn't be from ONtario, OR, would she be? So fun. Also, love the pants. So stylish.

Oh yeah, we're stylin'!
Yep, Meikjn is from Onterio - do you know EVERYONE Callie!?

How darling.. I dont think I had ever heard your story either.
You don't by chance still have those jazzy pants do you???