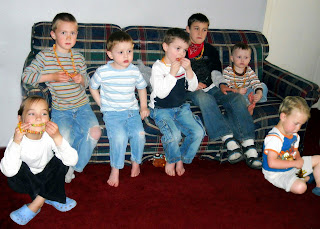 Friday we had Gavin and Callie's kids come and play. We made cheerio necklaces and then had a popcorn and movie party. We watched "Charlotte's Web" the boys and I picked it out at the library.
Then they all colored pictures while I made lunch. Our table is not designed for big families! We had four on each side (if you count me) so we sat extra close to eat our food.
After lunch we usually take a nap so we had a bunch of grouchy, antsy kids who were running up and down the hall (if you can call it a hall) from the front door to Tate and Canton's bunk bed and back. After a few of them got run over I decided to take them somewhere that they could run!
We all went on a walk to Centennial Park - where they were able to get out a lot of their wiggles. But we learned some new things about big kids AND little kids playing on the same playground. Dawsey and Rannon spun the merry-go-round very fast - Brigham and Duncan thought it was great fun and were laughing!! But Canton wanted to get off, instead of asking them to stop he just walked off (while it was spinning.) Ouch!
Then Tate was sitting opposite Rannon on the wooden horse thing - got bucked off and hit his head on the metal saddle.
Brigham and Canton had each taken off one sock, filled it with sand and were beating each other with them (Brigham said they were their "clubs") I was breaking that up when Oran walked in front of Rannon's swing. He got knocked down and drug in the sand - Dawsey was so great and gathered him up and comforted him until I could get there.
He was all bloody - and his mouth and nose were all full of sand and rocks. It was so sad. I tried to clean him up a bit in the drinking fountain at the park and then we walked home.
Gavin and Callie got there about the same time we did.
I spent all night (until about 1am) doing laundry and getting us all packed for our trip to Utah.

Saturday morning there was a free community breakfast, put on my the Lion's club, at the old town pavilion. We went there around 8am and had pancakes and link sausage - we each had orange juice to drink. A man and his son came and sat by us. The man had coffee in his cup Oran was pretty funny. He saw the steam coming off the cup and said "Oh, HOT Juice!" then he blew again and again (I guess trying to cool it off for him) then the man took a drink and Oran scream, "NO!! HOT!! OUCH!!" the man was a little surprised!
Saturday was also the opening day of the farmers market - right next to where we had breakfast. After we finished eating we looked around at all the neat things. We saw vases made out of gourds, and goblets carved out of solid pieces of mahogany, pottery thrown on a wheel, fired and glazed in magnificent colors - and, of course, plants! Tomato, red pepper, green pepper, cucumber - and all kinds of trees and flowers. This year they've invited flea market vendors to participate also (to make it a bigger event) so we saw a lot of antiques, books, and things with pealing paint and rust!
It started to rain, but we didn't mind. 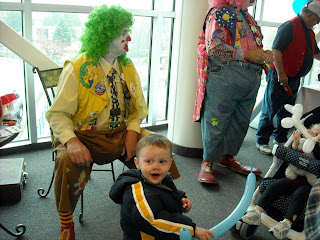 We went home and found our coats and our favorite stuffed friends and headed to the hospital for the 28th annual teddy bear clinic. There were Shriner's Clowns making balloon animals! 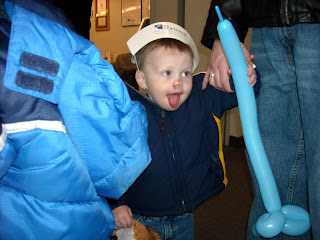 "Space" "Hippo" and "Squirrel" were all admitted, had their blood pressure taken, received casts, x-rays, and surgery! we visited the cafeteria for cookies and milk and then we came home for lunch. (We didn't watch the puppet show or have our faces painted - the line was too long and we were getting grouchy!) 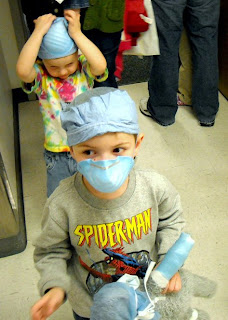 After lunch we packed the car and hit the road (in the rain!) It was 1:00 when we left, we wore the kids out good so they all slept until we got to Salt Lake!

We ate dinner with Rob and Hillori, their kids and Barb (her flight got in to SLC at 7:45am) at Rob and Hillori's home in Mapelton. Then we all went to the Jr. High for Audrey's ballet recital. It was cute - lots of little girls in leotards and tutus. Oran loved it! He conducted the music, bounced up and down and clapped louder than anyone else, and kept yelling "YEA!!" Canton got bored and Tate was sad that he couldn't see better.
After the kids were in bed Ryan and I had fun "playing" with Rob and Hillori as they got all of the food ready for the next day. Barbara and I went to the grocery store to pick up a few last minute things (I don't like driving in an unfamiliar place in the dark, but Barbara is a great navigator and we had fun on our little outing to the store - without any children!)

Sunday was kind of crazy! We were glad that we all got ready for church before the crowds arrived! LOTS of people! LOTS of kids! We were so glad that it was a beautiful day and they could all play outside!

Grandma and Grandpa Green came with Lisa's son Colton. Grandma Stavast also came with Barb's brother Jim, and his wife Peggy, Auntie Gladys, Uncle Dean, and Auntie Ellenor. A lot of Hillori's family was there too - I had a hard time figuring out who was connected to who and how - I don't think I met them all. 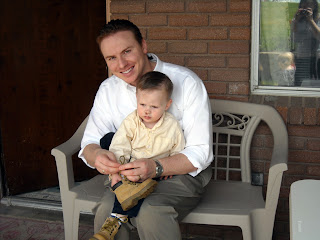 The blessing was beautiful, Rob did a wonderful job. Rob, Hillori, and Barbara were all among those who bore their testimonies. It was a very nice meeting. 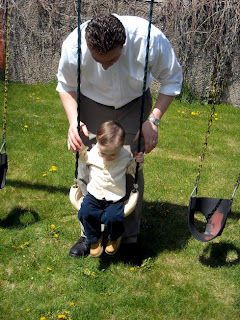 Sunday was also Barbara's birthday so we sang to her and had cake, lots and lots of cake.
We decided to stay another night - it was nice to have some more time with the Greens after everyone else was gone. We had a nice visit with Barbara. I got to hold Baby Elise a lot (she liked me lots and didn't cry at me at all. So I got to keep her for hours and hours!) It made Oran mad on Saturday, but on Sunday I let him see her and hold her hands and look at her toes, then it was OK for me to hold her. Canton wanted to hold her so I helped him - he was so sweet and held her so nice. 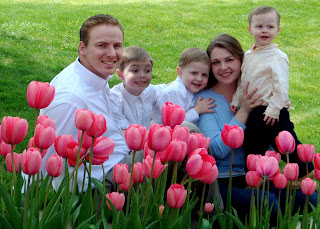 Lucy was my friend too! She is the cutest little girl! She has red hair and dimples and is ALWAYS smiling - she is only a few months older than Oran (she turned 2 in

I'm an AUNT!!
I love having nieces and nephews!!

Elise had such a pretty blessing dress! This was at the end of the day after everyone else had left and she was still spotless clean! I was impressed!
Posted by Caranna at 5:49 PM

What a great pic of your family by the tulips!

Nice blog, here is some more information on metal beds.