Canton is convinced that he IS Superman! He refuses to wear anything that is not red or blue. And insists on wearing a cape everywhere he goes! And, of course, if he's wearing a cape he has to run EVERYWHERE so it billows behind him. I'm tired of all the running and jumping but most of all I'm tired of him insisting that I refer to him as "Superman" if I call him "Canton" he either will simply ignore me, and not respond of he will yell, "No, I'M SUPERMAN!!!" 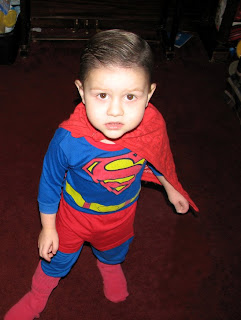 He's always claiming to hear people calling for help, at which he will drop whatever he's doing (reading a story, eating dinner, whatever) and run off to save someone who is in need of his assistance.
He jumps off of everything! It's not so bad in the house when it's couches and beds, the fall isn't too far and the carpet breaks his fall. But he leaps off with arms out stretched and often lands in a full out belly flop. Occasionally I'll hear him say "Ow!" to which I just shake my head and wonder why he doesn't learn!
It's when we're out of the house that I worry! He does the leap and belly flop out of the car sometimes on to our concrete driveway or on to asphalt parking lots. We were at Lowe's the other day when he heard a cry for help and lept out of the cart. Luckily I caught him before he landed on the hard floor. People must think we are very abusive parents if you look at all his scrapes and bruises! 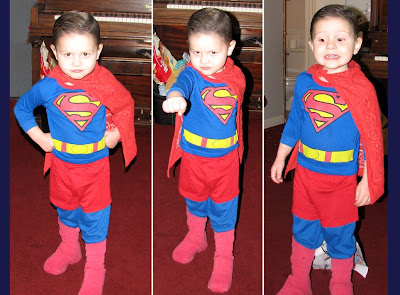 I took him to Fred Meyer the other day he was standing next to me and I turned to get the baby out of his car seat and Canton took off. Head bent one arm out in from of him as he full out ran from our car to the front doors of the store, all with cars going this way and that. I was not happy! And when i told him he couldn't do that he simply responded, "No, Mommy, I fly way fast, the cars can't hit me!!"
ARGH!!!
I'm tired of living with Superman! When will it end!?
Posted by Caranna at 8:53 PM

Oh my goodness, that's funny and scary all at the same time. You'll have to let me know if you figure out a way to solve that one - I don't know what I'd do.

Maybe you could apeal to his alter ego. Say Clark Kent goes out in public (so he has to be good) and Superman stays home (so he can run and jump and fly.) It is a long shot but it might work. Although he is a handsome superman.

wow! how fun for mommy!
We went through a superman stage a couple years ago. But it only involved wearing the cape and boots everywhere we went. At least we never had any belly flops out of the car!
Good luck with that one!

Dallin was Captain Underpants for a while (before he knew about the books). At least your boy doesn't want to wear underwear on his head everywhere you go!! Be patient. You will someday laugh at all of this. Maybe you should set some ground rules, and maybe play the damsel in distress sometimes, and teach him the different between reality and not. Toddlers, and often pre-schoolers can not difereientiate between the two. Help him see when it is good to pretend, and when it is not acceptable. It might be okay to play superman with mommy, but not in a parking lot. He needs this information before hand. His is by the way much better looking than Clark Kent. What a doll!!!

So sorry! It's so funny, but I can tell it's scary, too. He is so cute as Superman. I also just saw the tag. Thanks!