We have had a VERY busy October, and I am glad it's over! My Grandma, Caroline "Oleta" Jensen White, passed away on October first.
She was 98, and had lived a long, full life. She had been deteriorating for years and it was time. We will miss her, but are glad that she is freed from the limitations of a aging, mortal body. I'm sure she will be able to do much good on the other side.

We had a funeral in Preston, ID on Friday, October 3. Much of my family was there. We had a second funeral and burial, the next day, October 4 in Vernal, UT. All of those who weren't able to attend the funeral in Preston, came to Vernal. There were only 3 of my cousins who were unable to make it to either. My wonderful husband took our three boys

home to Pocatello, and I rode with my parents to Vernal and back.
It was fun to see old friends, and visit places I remembered going to as a young child. It was also great fun to be able to spend so much time with my parents, without my usual, small distractions.
To read the obituary and listen to funeral services visit http://www.webbmortuary.com
Here are all the cousins (and their spouses) who were at the funeral in vernal. There were others who came to the one in Preston. 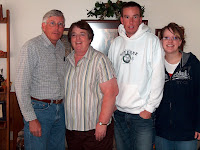 We stayed with the Foley's, It's so nice to have such good friends! I haven't seen them in 10 years, but it was like it'd only been a few months. We talked and laughed, and had fun sharing memories. Here are Keith, Aljean, Cory and Carrie, we saw Carl and Emily too, but this is all that came for Sunday dinner. 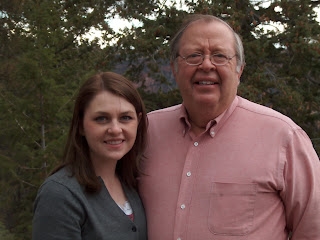 We stopped in Red Canyon to see Flaming Gorge on our way home: My Dad and I.

As soon as I got home I had to start making preparations for Ryan's business trip. We left, the following Thursday, October 9. I ran my kids down to my parents' house (in Preston, ID) then hurried back to Pocatello to leave when Ryan got home from work. We drove as far as Boise, where we stayed with Ryan's brother's family. Then continued on in the morning.
We drove for 8 hours on Friday, helped a family out of a rock slide. Left to find our hotel, got lost! (Google maps couldn't have been more wrong!) Had to hurry to get cleaned up before meeting other members of Ryan's team for dinner, and then went to bed exhausted!!

We spent all day Saturday in the convention center. It was neat to hear all the heads of the company talk, and to help everyone else get 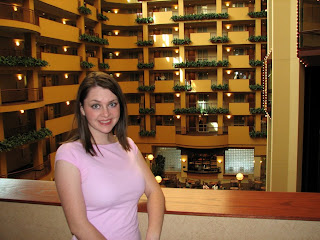 excited about this fantastic business opportunity!! (Because it really is WAY awesome!) I'm pretty pumped about the whole thing!
We are officially on our way to financial freedom!
See http://www.idaleader.com for the business opportunity or http://www.mycdrpsavings.com/idaleader for information on the product
We went to dinner with the founder and CEO of IDA that night along with 6 other couples. That was lots of fun! 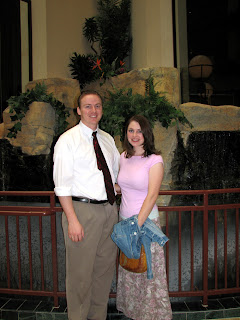 We went to bed way too late that night too! Morning came far to early and we were once again on the road, this time on our way home, a destination we did not reach until Monday evening around 9pm.
We stayed at the Embassy Suites in Portland, OR
I had never fully grasped the concept of "was this trip for business or leisure?" I always thought you could easily mix the two. But this was definitely a business trip, no leisure whatsoever! I got home feeling more exhausted than when I left and did not feel like I'd been on a vacation at all!
_____________________________
A few days after our return, our kids had a bad case of the sniffles. This followed by one of the worst colds I've ever encountered! Ryan and I were only a few days behind the kid with this crud, that I've come to call "the cold of death!" It's been weeks and we're still coughing (although not quite as miserable)
_____________________________
My birthday was October 15. I turned 25 this year!! A whole quarter of a century! Ryan had to work all day, but I had a wonderful birthday. Ryan got up with the kids and fed them breakfast! I got to sleep in a bit. The boys came in to sing "happy Birthday" to me around 8:00. They'd been making cards while our awesome Daddy cleaned up. The dishwasher had been loaded and the living room floor vacuumed by the time I got up.
Ryan got off work at 7:00. My very good friend, Sam Hardcastle, offered to watch the kids so we could have some time together on my birthday. Ryan made reservations at the Texas Roadhouse. Although it's been open in our area for about a year I had never been. Ryan called ahead to see what on the menu I could eat (I have an allergy to soy). And they even saved a place on the grill for me that was 'Soy Free.' So I didn't even get sick on my birthday! That's a huge plus!!
_____________________________
Through all of this I was doing my best to put together our Halloween costumes! I got Ryan the complete set of "Harry Potter" books for his last birthday. So within the last year Ryan and I have both finished all eight of those books. (We're both HUGE fans!) So for Halloween this year we decided to be characters from the "Harry Potter" books by J.K. Rowling. 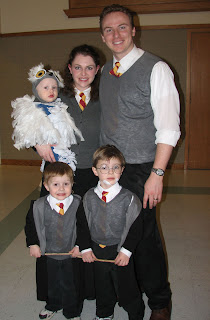 Caranna is Hermione Granger, Oran is Hedwig, the owl, Ryan is the Weasley twins (Fred AND/OR George) Tate is Harry Potter, and Canton is Ron Weasley.

Last night we attended our ward "Chili Cook off" and "Trunk or Treat." We won the prize for the best dressed family! We had lots of fun showing off our costumes and teaching our kids to beg for candy :P.
After we left there we stopped to see "Aunt Bonnie Green" she gave us some candy, the good kind, and told our kids they were cute, they always appreciate that. Then we stopped to see Ryan's Grandma, "Great-Grandma Stavast" she was happy to see us, but isn't such a Harry Potter fan ;). 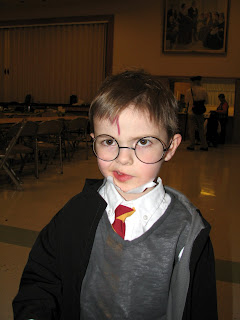 Around 4:00 Tate and Canton were taking a bath, getting all clean and ready for their Halloween costumes. Tate decided to get out of the tub, and as he was climbing out slipped and hit his chin on the porcelain. It was a pretty deep gouge, (compression cut) Ryan took him to the ER, and Tate got stitches.
They got back just in time to dress for the ward party and Trunk or Treat.

After that we went to visit Ryan's other grandparents, "Great Grandma, and Grandpa Green." Halloween is a tradition at their house. They always have chili and pumpkin cookies. They started the tradition when Ryan was little because they thought the kids should eat some "real food" before devouring all their Halloween candy.
While we were there we saw Ryan's Uncle Bill and Aunt DeeAnne, Uncle Alan and Aunt Debra, Aunt Lisa, and cousins, Colton, Annie, Mark, Michelle, and their three boys. It was a house full, and a party, like always! Fun, Fun.
We finished up the night with a stop at my Aunt Bonnie's house. My kids love to see the Bakes' family. We were a little late and they were already out of their costumes. But it was nice to see them anyway.
___________________________
Posted by Caranna at 6:17 PM

The costumes look great!!! I am always so impressed. Sorry about your Grandma.

Wow, you are so talented. Your family looks adorable. I wish I had your talents!!!

Thanks! I left my sewing machine out and left it unattended while I went to the store. Ryan got a phone call and didn't watch our kids too closely. Canton ripped the wire off of the tension mechanism on my machine. I couldn't get it to work right after that, so I have to sew the robes by hand.
So the costumes this year were more time consuming than in years past.
Oh well, stuff happens.
I guess I should learn to put my stuff away.

I must say you guys were the best dressed!! Your kids made me laugh so hard.... poor Tates chin he told me the whole story!! I hope your November slows downa bit you guys had a crazy Ocotber!

It looks like you guys have been very busy! I loved your costumes! So cool, and you're so talented! I hope all is going well for you. You look beautiful in all your pictures.

Hi Caranna! You have a cute little family! I hope everything's going well for you. Take care, Chris