Yesterday we were supposed to have our family pictures taken.
After my brother Gavin's accident (he fell 30 feet while trimming a tree in his front yard on July 13th) a lady here in Idaho Falls organized an auction to raise money for his family.
A local photographer donated a photo session that I bid on and won.
I thought that it would be fun to do a fall shoot with all of the pretty autumn leaves. the photographer said that it was best to do it the beginning of October if you wanted all of the leaves (before they are all gone.) So we scheduled the shoot for  last Thursday, October 3, but it snowed! So we rescheduled for yesterday, October 10.
The photographer, Whitney, likes to do the photo shoots an hour before sunset, because the lighting isn't too harsh. So we had planned to meet at Freeman park yesterday at 5:45pm. By the time we got there it was windy and rainy. So we had to reschedule again! We're planning to try again next week (and hope that the leaves hang on a bit longer.
I had us all so cute - all matching in maroon and gray. I even curled my hair! (That doesn't happen very often.) It was kind of a bummer.
After getting rained out of our photo shoot we decided that since we were all dressed up and out of the house that we should go somewhere, so we went to the library.
We all found books and movies to borrow and by the time we were done it was 6:55. I thought that since it was nearly 7:00 we should stay for the family story time. Because one of our favorite librarians, Jamaila, does story time and there were no other families in the story room yet ( I would hate to have no one show up for Jamaila.)
By that time we'd already been at the library for an hour, so our kids were getting antsy, and our baby wanted to nurse. So, Ryan and the 4 older boys went to the story room while I went to the car to nurse the baby.
When I came back story time had already started - There was us, and 2 other families there (with 2 kids each) so I'm glad we stayed. The topic was "Friendship" Briar loves the songs and finger plays so he had a good time.
When story time was over we went to the car and realized that I had accidentally locked the keys in the car. Once I got to the car I'd just thrown the keys in the cup holder and sat down in the passenger seat to feed my baby. Once he was done eating I said, "OK, let's go!"  I picked him up, opened the door, got out, pushed the "lock" button on the door and shut it.
Ryan had not brought his set of keys, and mine were locked in the car. We were stuck. It was dark, cold and rainy and our kids were tired, grouchy and hungry.
We went back in to try and decide what to do. Tate and Oran sat down on one of the couches in the children's section. On the adjacent couch sat a nice Grandpa man (in his 60s) they struck up a conversation.
Ryan and I stood at the desk discussing our options with one of the librarians.
Ryan had left his cell phone in the car and mine was at home. we decided that the best option was to call someone to come get Ryan, take him home to get the other set of keys and bring him back again. I left Ryan leafing through the phone book hoping to find someone we knew listed.
I walked back over to see how Oran and Tate were doing (Briar was in my arms, Skyler was wrapped around one of my legs and Canton had run off.) The man on the couch looked up and said, "Is this lady your Mom?" Tate, Oran and I all answered in the affirmative. Then he said, "I hear you've lost some keys." I explained the situation and he offered to give Ryan a ride home to get the other keys.
I went and told Ryan about the man's generous offer. The man went to get his wife and they took Ryan home.
While the kids and I waited the big boys all played games on the computers while Briar and I sat close by and played with puppets and read board books.
Ryan brought his own car back so that the nice couple who has helped us wouldn't have to bring him back to the library.
By the time we finally left the library it was a quarter after 8:00pm and we still hadn't eaten any dinner! Ryan took Canton with him in his car and the 2 of them went to pick up a Papa Murphy's pizza while I took the other boys home, preheated the oven (to cook the pizza), and got them in their pajamas.
We then had to cook and eat the pizza. So by the time we got the kids to bed it was 10:00.
This morning everyone slept in. The boys were nearly late for school - and I sent them out the door with messy hair.

I learned 3 things:
1. Things don't always work out the way you plan.
2. There are much worse places to be stranded than the public library.
3. There are still kind people in the world! 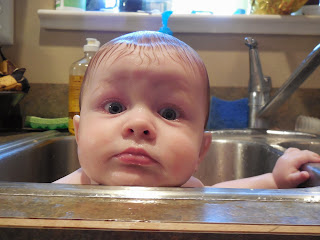 And, since all posts are more fun with pictures - Here's a picture of baby bathing in the kitchen sink.

Fun picture! Sounds like a rough day - with a blessed moment or two. I'm so glad that nice man helped you out. And nice that your kids were in the mood to chat with a nice person. :) Excited to see those family pictures . . . when they happen. haha