Remembering that it could be worse 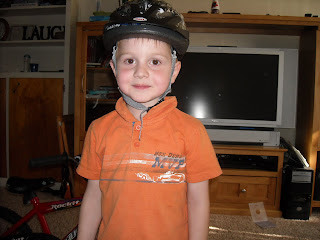 I've been very frustrated with Canton lately. He just has more energy than I know what to do with, and if he gets bored, as he often does, he starts to pick on his brothers and makes them cry.
When I remove Canton from the situation things are calm and peaceful, there is no fighting, and, at bed time, his brothers can go to sleep. So it's obvious that Canton is the one causing the problems.
Today I was looking through some old postings on our family website and remembered that it could be worse. I found this post that I made on one of "those" days, it brought back some memories:

It has been a day of never ending messes at our house.

This morning my kids were eating breakfast and Anna called, I left the room for a minute to talk to her. I heard my baby scream and when I returned to the kitchen I saw that Canton had squished bananas into his own hair and and dumped a cup of yogurt on Oran's head.

I got Canton clean and dressed and was working on Oran when Canton came looking for a towel, his blue shorts suspiciously white. His room was absolutely covered in an inch of baby powder. Our new bottle is now more than half gone. I shook out blankets, swept, vacuumed and dusted, but every surface in their room is still covered in a thin layer or white powder.

Next Canton ran to the bathroom shouting he needed to use the potty. (This is a typical occurance as of late, so I thought nothing of it.) He was taking an unusually long time so I went to check on him, only to discover that he pooped in his Pull-Up before he made it to the potty and had tried to clean it up himself. He had the smelly mess all down his legs, and smeared all over the bathroom: floor, walls, toilet, and tub. But that's not all, he'd tried to flush the messy Pull-Up down the toilet, causing the toilet to clog and over flow. Lovely!

By the time I got that cleaned up we had missed our opportunity for lunch at the park. I told Canton that we couldn't go to the park because he'd made so many messes. That made him very upset! He Dumped out the basket of toys and started throwing them in all directions. I tried to ignore his fit, hoping the lack of attention would discourage him, until a wooden block collided with the TV screen, bounced off and hit Tate in the forehead. After a good cry with his face in the corner I had Canton clean up THAT mess himself while I made lunch.

We had Hawaiian Haystacks for lunch using our leftovers from last night. I finished first and decided to vacuum up more of the baby powder before nap time. Back in the kitchen Canton had finished his food, but for some reason decided that Oran needed his to be soup! He dumped his water into Oran's bowl and was stirring the rice concoction. Oran thought it was quite funny, and was squealing with delight when I came in to see him pour the bowl of "soup" all down his tummy. [time for outfit #3]

I grumbled at Canton "Are you done eating!?" "Then go use the potty, before we take naps." I got Oran clean up, and dried off. Again Canton was taking too long in the bathroom. I opened the door to find him standing in the middle of the room, without any pants, holding up a sopping wet roll of toilet paper. "It's all wet!" He said very innocently. He had dropped it into the toilet after he was done using it and fished it out - isn't that nice? And it was our last roll of toilet paper!!!

The kids are now all napping, thankfully. I think I've had enough Canton for one day! And the day's only half over!

Thanks for listening to me grumble... I hope your days are going better than mine.

So, even though Canton is still my most challenging child, I'm not spending my day cleaning poop off of the walls.
Posted by Caranna at 11:06 AM

Ha! Yes, that does give a little perspective doesn't it. Being a mommy is tough! Especially a stay-at-home mommy - you've got to put up with monsters all day sometimes! Hang in there. Someday he'll find something he loves and all his energy will be devoted to it. And he'll be amazing! Someday . . . :) By the way, your family photo at the top is so great! You all look so well together.