It's been six weeks now since Skyler joined our family. I thought I'd better get this written down before I forgot it all completely. 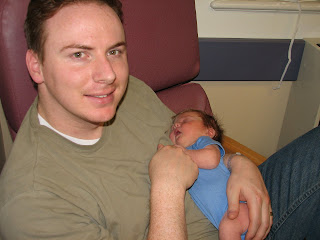 I had an appointment with my midwife on Thursday, September 30th - I was a few days past my "due date" so Tracy stripped my membranes and made a prediction. She predicted that we'd be coming in by 8pm that night and that we would definitely have a baby before the weekend was over.

She wasn't too far off, I started having contractions around 7:00pm. The contractions were consistent, but not as strong as I felt they should be. I'd spent many nights counting contractions trying to decide if it were "time," and these felt no different.

By 10:00 the strength of my contractions had lessened so I went to bed feeling discouraged; doomed to spend another day in my uncomfortably pregnant state.

Around 2:00am my contractions were strong enough to wake me up, they were coming about every 5 minutes and were hurting. I laid in bed watching the clock for a while until I was hurting so much that I could no longer lay there.

It was the middle of the night and everyone was asleep so I got up and got into the shower, hoping to get some relief from the pain, but every contraction was hurting more and more.

I wrapped a towel around myself and went back to our room. I prodded Ryan until he woke up. I said, "I need you," and "I don't think we can wait much longer."

We left the porch light on and the door unlocked then we headed out into the dark, wee hours of the morning.

I was afraid that the ride to the hospital was going to be torture, but I only had one bad contraction and then, lucky me, I got a break until we got to the hospital (which is about 15 minutes from our house.)

We got to labor and delivery a little after 4:00am, I changed and we answered all of the questions (as I paced the room trying to make it through each contraction.) They called Tracy and then the nurse wanted me to lay on the bed so they could check me out and monitor the baby.

"You want me to lay on the bed for 20 minutes!?" I asked, it seemed like an impossible thing to ask of me, at the time, but I agreed (mostly because she insisted.) We discovered that I was only dilated to a 4 and my heart sunk. I was sure that I was farther along than that, based on the level of pain I was in. I thought I must be close to the end and when I found out I wasn't I began to doubt whether or not I could make it - I didn't think I could keep this up, the way things were, for very much longer.

When Tracy got there she said, "You're only at a 4, do you want to stay, or would you rather go home and come back in an hour or two." I said I wanted to stay, Tracy shrugged and sat down to fill out some paper work. But after watching me through a couple of contractions she causally said, "This seems pretty active to me." See, I do know what I'm talking about!

As the pain got worse I was having a hard time coping. I couldn't figure out what was wrong with me and why I was having such a hard time. I kept thinking, "It wasn't this hard with Oran."

I was trying to stay positive, breath, and work with the pain. My water broke during one of the contractions and the nurses were quick to throw some towels on the floor so I wouldn't slip and fall. I felt like I wasn't in control, and like I couldn't even see, I was blinded by the pain (if that's possible.) All I could do was hang on to Ryan and Tracy. My contractions were right on top of each other, there were no pauses and no time to breath in between.

Tracy decided to have me get into the jetted tub and see if that would help me relax a little. She checked me before I got in and I was only at a 7. The nurses filled the tub and Ryan and Tracy helped me get in. I was only in the tub through one contraction, Tracy thought it looked like I was ready to push so they got me out of the tub (even though I protested. Portneuf Medical Center is not licensed for water births.)

Ryan had one arm, Tracy had the other, one nurse was trying to put my gown back on and the other was trying to towel me off all while we walked from the bathroom to the bed.

They had barely gotten me situated on the bed when I had to push, which I did, I yelled, "Help Me!" because everyone but Ryan had turned away to get the equipment ready. Tracy and one of the nurses came back to help, while the other nurse scrambled to gather supplies.

[When Ryan tells the story he says, 'She laid down, and Pop, there was a head!']

I felt like I didn't see anything from the point when I left the tub up until I was holding Skyler on my tummy, as Tracy dried him off, but Ryan insists that my eyes were open the whole time, I don't think I believe him.

Skyler was absolutely perfect, he wasn't bruised or misshapen (probably because it all happened so fast.) He entered the world on October 1, 2010 at 6:03am, less than 2 hours after we got to the hospital. He didn't need oxygen so I was able to hold him and feed him right away. They didn't even take him for his first exam (until later.) Everyone left and Ryan and I were left alone to bond with our new baby.

Tracy later made the comment, "That was kind of a wild ride," I decided that was a good way to describe it. It was a traumatic birth experience for me, I couldn't even talk about it for a few days and actually had nightmares about it for a couple of weeks following the birth.

But, I am glad that I was able to do it without any pain medication, even if it wasn't as great an experience as my third birth, it's still nice to know that I can and I did! 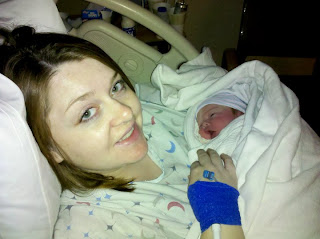 Everything is fine now - we are adjusting to life with four boys, and are glad that Skyler is part of our family. 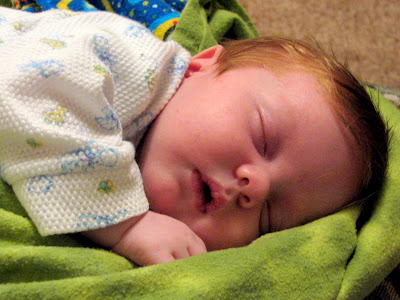 He is so very sweet and we all love him a lot.
Posted by Caranna at 3:44 PM

Have you done all your births naturally? I am trying for my first natural birth this time and I am a little scared, especially after reading stuff like this. ANy advice?

You DID it! Yea! Was that your first without medication, or was it 'old hat' for you? I love the picture of you . . . I've totally felt that expression on my face. haha Oh, the things we do to get these precious spirits here! Great job!

I had an epidural with both Tate and Canton, then I went "all natural" with Oran and it was great!
I was all ready to do it again, but it was harder this time!
Every birth is different.

All natural was a bit too much for me when it came to actually being there in the room. Glad it all worked out for you!