We had a neat weekend; we drove to Burley, ID last Friday and stayed at the Fairfield Marriott hotel.

Saturday we got up at 6:00am, went down to breakfast and then had to meet in the lobby at 7:45 all dressed in our fancy clothes, ready for family pictures. We all dressed in brown, blue and green so we could match! 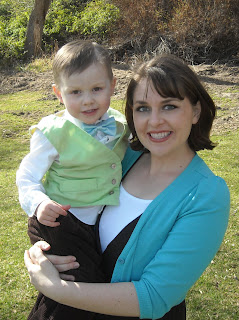 Ryan took some pictures while we waited for our turn with the photographer (for individual family pictures.)

We took pictures in the park next to Shoshone Falls. I'll be excited to see how they turn out. 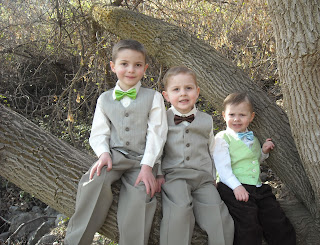 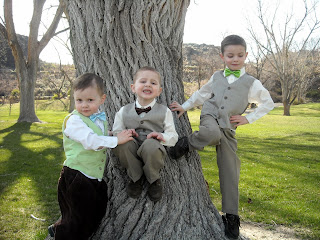 We went to the Twin Falls temple to watch Ryan's brother and his wife be sealed to their 2 adopted sons. So many people were there to support Eric and Bonnie. Ryan's Aunts and Uncles from the Green side and the Stavast side. Grandpa Green (Don) was there and so was Grandma Stavast. Lots form Bonnie's family, family friends and even the foster family that had, had Bill and Austin before Eric and Bonnie got them.

We were in the biggest sealing room I had ever seen! It was beautiful! I was quite emotional. It was a wonderful ceremony, and it was so neat that Eric and Bonnie finally have children of their own to keep forever and ever!! It was neat to watch them interact with the boys in the temple and to see those little boys... Bill and Austin are the same ages as Tate and Canton so it was extra near and dear to my heart.

After some pictures we went back to the church and had a very nice lunch. Once we got back to the hotel we were all very tired and took a nap - then we all played in the swimming pool! Lots of little cousins and Grandma too! Oran was so cute and very comfortable in the pool; kicking his legs and flapping his arms on his back or his front. He kept going from person to person, Uncle Neil, Uncle Eric, Grandma, Mom or Dad. But Tate was very clingy and panicky! He's never liked being in the water, but I was hoping he would get better. Canton was doing really well until he got a little too fearless and got into some trouble. I swam over and rescued him, but after that he was content to sit on the stairs and kept saying "I couldn't see, and I couldn't breathe, and I couldn't talk! It was too deep and I was sinking!!" But before we left the pool area he was getting a little braver and walking around in the 3 foot section.

It was a fun time! I always love spending time with family adn the hotel stay made it extra fun and special.
Posted by Caranna at 4:14 PM

Oh! Look how handsome your boys are! Love the bowties!