Life has been so busy, and it feels like it's finally slowing to a pace that I can cope with!

I haven't been a very good blogger lately and am feeling repentant!

In November the boys and I rode with my Mom and Dad to St. George for Thanksgiving. We spent the holiday with Brady and Anna in their lovely home in St. George. My parents, Brady's family, the Boys and I, My sister's family and my cousin Debi were all in attendance. 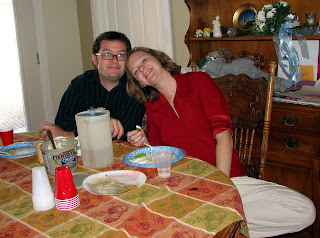 Ryan had to work late on Wednesday and early on Friday so he couldn't be with us, but he got to spend the holiday with his grandparents and many of his Aunts and Uncles in Chubbuck.
We ate lots of good food, played games, and enjoyed one another's company.
Thursday evening my Dad, Brady and I took the kids to the park to get out some of their wiggles, they all had a great time. 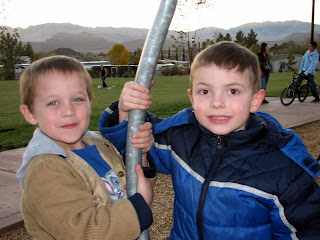 Zander and Tate were good buddies, it's so nice to have a cousin so close to your age! 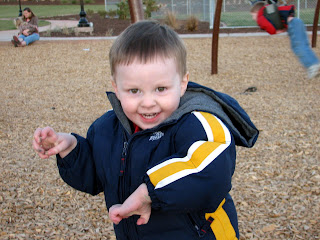 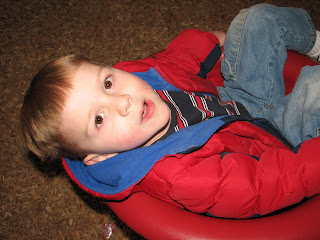 Canton spinning round and round until he was too dizzy to stand. 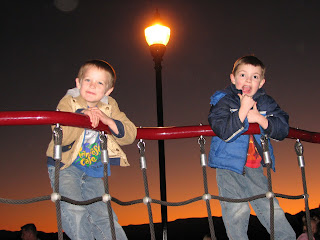 On Friday morning all of us girls got up at 4:00am and went out CRAZY black Friday shopping, it was my first experience standing in line and being there when the doors opened. It was very exciting!

After we got home from shopping and go a little nap we packed a lunch and headed to Pioneer Park from some exploring. It was way cool! 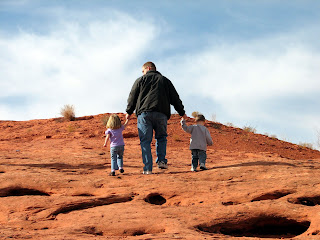 My brother-in-law Brandon helping Oran and Ady climb the rocks. 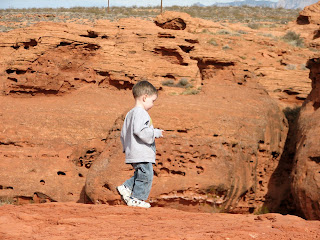 Oran walking on the rocks, gee, he's getting big! 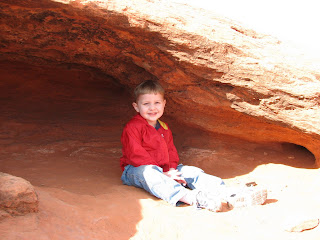 Canton in a cave! While we were exploring the Red Rocks at Pioneer Park Grandpa kept saying things like, "...When I used to live here..." meaning in St. George, Canton found this cave and asked, Did Grandpa used to live in THIS cave or was it another one? 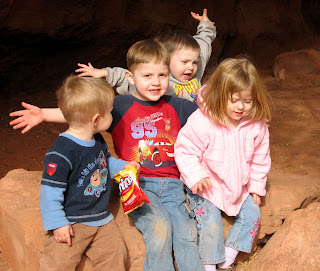 Cute Cousins sitting on a rock - we tried, unsuccessfully, to get them to all hold still long enough to have their picture taken - this is as good as it gets! 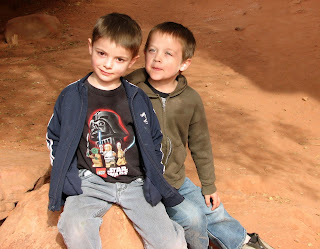 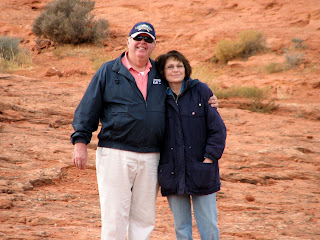 My Mom and Dad were there too. 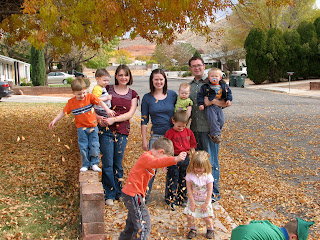 Before everyone left we got a picture of Me, My sister and My brother with all of our kids throwing the fall leaves, how festive!
I'm so glad that we were able to go, it's always fun to spend the holidays with people you love!

I busied myself all of December making homemade gifts - which I really enjoyed. I made 2 dresses, 7 crocheted stuffed animals, hats, scarfs, a crocheted table runner, 4 fabric covered notebooks/journals, and popcorn heating pads. I loved having a new sewing machine to work with this year! (I got it for my birthday, THANKS AGAIN RY!)
Our Christmas was the best one yet! It was so fun to see our children so excited about everything. They all understood the Santa Claus thing, and since they saw me making so many gifts they all wanted to make gifts for their friends and for each other (it was cute.) 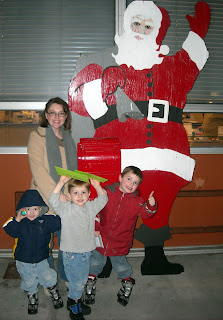 We wrote letters to Santa Claus and took them to the post office to put them in the special Santa mail box, and because we used the magic mail box Santa wrote back to us! 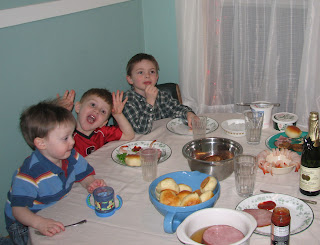 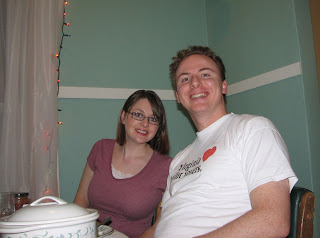 Canton took a picture of Ryan and I so we could be in a picture too.

On Christmas morning each of our kids were so excited about everything! With each present it was "WOW, look what I got!" or "...Just what I wanted!" It was a very good Christmas. 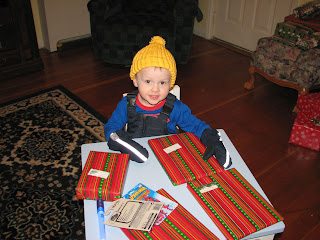 All of our kids got gloves a hat and snow pants. (We were hoping to be able to play in the snow, but we haven't seen much yet!) 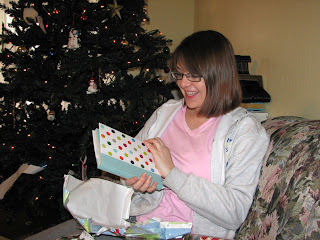 Oh look, I got a new journal! Always love those! 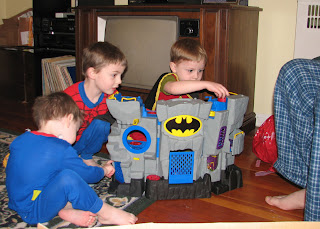 The bat lair was a big hit with all of the boys, I knew it would be, and so did Santa ;)

On Christmas day we went to Preston and spent some time with my Mom and Dad and My Aunt, Uncle and cousins. It was a fun day!

We had great fun ringing in the New Year! This year we planned a little better - Ryan didn't work so we played all day and kept our kids up - They took a nap from 5:00 - 7:00pm and then we went out for some fun.

First we went to our stake New Years Eve -party. This was the second year so it worked a little better than last year. They started earlier and had the "count down" at 9:30 with confetti and balloons. They also had pizza, root beer floats, board games, Karaoke, and dancing. 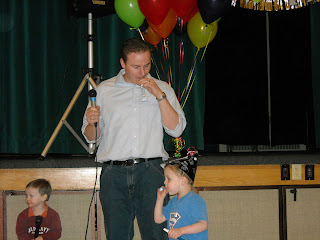 We all got party hats and noise makers!

Then we went to the first annual New Years Eve cast party at the Mystique; for anyone who was in a play at the Mystique for the entire year of 2009. That party was from 9:30 - 12:30. They had LOTS of food set up buffet style. There was chicken, prime rib, baked potatoes, lasagna, penne, and linguine, with choice of Alfredo or meat sauce, cooked carrots, chips with either 7 layer bean dip, or spinach artichoke dip, and for dessert: pumpkin roll, cheese cake, cream puffs, toffee and chocolate chunk cookies or brownies.

Lisa, the director, and Debbie, the costume lady, gave out silly awards. They had painted colored circles on the stage and set up a huge Twister board, so everyone played Twister. They also had a big blow up dinosaur bouncer that our kids had fun jumping in. 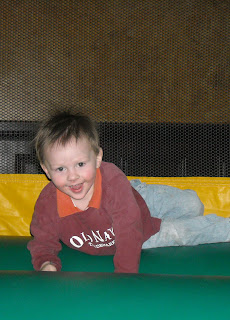 We had a "dance off" where we performed numbers from plays throughout the year. From Millie we did the opening number, "Not for the Life of Me" and the speak easy number, "Nutty Cracker Suite." It was way fun to watch the numbers from Grease, Footloose, Aladdin and White Christmas.

Two of the magicians were there, Farrell Dillon and Jon Armstrong, they did a couple of shows in the Chamber room. My kids thought the magic was cool. Oran thought it was extra neat that Jon was wearing a white shirt, tie and a gray sweater vest - he pointed and shouted, "It's Harry Potter!" Jon didn't seem to think that it was very funny, but I did, and there was definitely a resemblance between his outfit and the Hogwarts school uniforms. 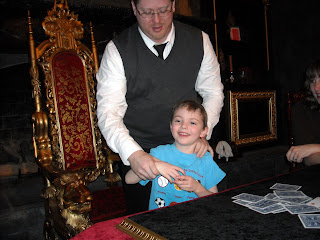 Tate got to help with a card trick.

Farrel was holding something in his hand and he tapped it with his wand - as he did so Canton shouted, "Abracadabra!" everyone in the room laughed, it WAS pretty funny.

We all had sparkling cider, cranberry juice or grape juice in fancy glasses - there was a countdown and we all drank our "fizzy drinks." Ryan and I kissed in the New Year, as is tradition. Then we all danced on the stage. Canton is quite the little dancer. He was picking up on the line dances and danced with all the pretty girls (we thought it was funny.)

Oran had fun dancing too, but the poor little guy kept getting scooped up, danced with and thrown around by all the other cast members - I guess that's the price you pay for being the only 2 year old in a room full of single people. 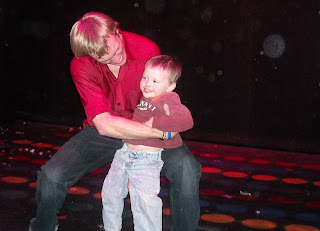 Tate did some "break dancing" rolling around on the floor and such, but he seemed to enjoy sitting and conversing more. He'd go sit by anyone who was sitting down and start a conversation with them, I'm not sure what all he talked about. 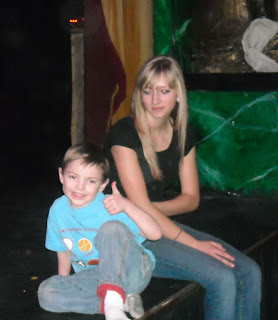 I'm so glad that I got the chance to be part of the "Mystique Family." It was awesome!!

Since then my sister came for a visit, we've made a few resolutions, that I'm hoping we'll have more success with in the future than we have in the past 20 days. And We're trying to get back in a routine with Ryan starting a new semester, with a different class schedule, and Tate going to kindergarten.
Posted by Caranna at 1:44 PM

Esther has been telling everyone Santa forgot to come to our house because she saw me making her presents. and most of the other stuff came in the mail. oh well... maybe I can restore her faith next year. Your kids are huge! They really are fun when they are older.