This little man in my tummy is getting awfully impatient!

This past weekend we had all of our boys home. For the two days they were here I had contractions and other labor pains all day. Yesterday was a little easier, because things were quieter and calmer, but I continued to to have pains.

By about 6pm yesterday I was really miserable. I continued to take my Nifedipine, drink lots of water and took 2 baths but I couldn't get the contractions to stop; they were actually increasing and becoming more intense. Around 10pm I called my midwife to see if there was anything else I could do. She told me to take another pill, soak in the tub and if it didn't get better in an hour or two to go in to Labor and Delivery at the hospital.

Still no luck, so Ryan and I went in to Labor and Delivery around midnight. I got all hooked up to the monitors. The baby looks strong and healthy, but I was definitely having contractions. The nurse checked my cervix, I was only dilated to a ONE - courtesy of all the medication I'm sure. Right now I'm at 35 weeks, and we'd all like this guy to stay put for one more week.

They gave me a shot of Tributaline, in my arm. It's another drug to calm the muscles of the uterus. We stayed for an hour after I got the shot with no change in my contractions. The nurse seemed very surprised that the Tributaline did not stop them and said, "It looks like you're just going to contract and there's nothing else we can do about it."

She advised me to go home and try to get some sleep, keep taking the Nifedepine, and if it didn't get better, or if it got worse to 'come back in the morning.'

I tried, unsuccessfully, to sleep all night. I finally gave up and got up around 6:00 - So I'm hoping to get a nap later today. I'm still having contractions and feeling miserable, but I don't think it's any worse that it was around this time yesterday. But it seems to get worse at night, so I guess we'll just wait and see.

I was REALLY hoping to make it until after my baby shower, which is THIS Saturday, so I'm going to keep my fingers crossed and hope for that. I have a Doctor's Appointment on Thursday, at which time we'll do the Strep B culture and they'll probably advise me to go off the medication and just let what will be, Be.

And that's what's going on here! 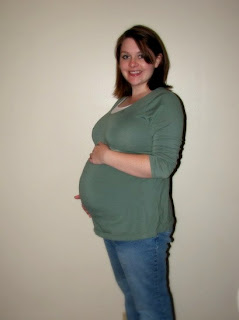